The markets for low-code and no-code tools are converging, increasingly incorporating pro-code tooling as well. There is more turbulence to come before these market categories settle down.

It was only a handful of years ago that the low-code story was innocently simple. Instead of coding software line-by-line by hand, use a low-code tool that provided visual abstractions that enabled developers to shortcut the hand-coding process by dragging and dropping tasks onto workflows, widgets onto screens, and the like.

Then along came no-code. The contrast between the two approaches was clear. Low-code targeted professional developers, simplifying their work by taking ‘plumbing’ tasks off their plate, while also facilitating collaboration with business stakeholders.

No-code, in contrast, was for business users, aka ‘citizen developers,’ who could build rudimentary applications via nothing but the wizards and drag-and-drop capabilities of the tools, with no coding more complicated than Excel formulas.

Today, however, both low-code and no-code have grown up. Their capabilities and target audiences now overlap – and furthermore, traditional tools for professional developers, retronymically named ‘pro-code,’ have been added to the mix.

Comprehensive change has transformed the once-straightforward low-code market. Where is it now, and more importantly, where is it heading? Let’s take a look.

The Merging of Low-Code and No-Code

In the early days of no-code, one of the category’s primarily limitations was the ‘cliff’ – the point at which the citizen developer couldn’t make progress because hand-coding wasn’t an option.

To address the cliff, most no-code players have added some coding capabilities (typically JavaScript), thus shoehorning their tools into the low-code category.

Simultaneously, low-code vendors have been simplifying their interfaces while reducing the number of situations where hand-coding would be necessary. Many such low-code tools thus became no-code in practice.

The result is that no-code and low-code met in the middle, where the better products in each category were not that different from each other.

The roles of the application construction team members became less important in the tool selection process than other considerations like the types of applications an organization wanted to build.

Low-code vendors, however, were not satisfied moving downstream to the citizen developer space, thus competing in the already crowded no-code market.

Many of them also wanted to paddle upstream to take market share away from traditional pro-code tools like integrated development environments (IDEs) and associated products – a moribund corner of the tools market that hasn’t seen much innovation of late.

After all, low-code tools by definition allow for some coding. Why not build out that coding capability to compete with the best IDEs on the market?

With vendors in several categories eyeing competitors in neighboring markets, application construction tools market has been experiencing an upheaval, as the diagram below illustrates. 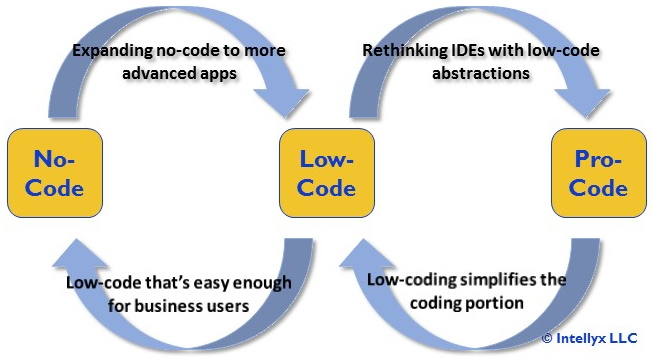 As the lower two arrows in the diagram above illustrate, bringing pro-code capabilities to low-code tools simplifies the coding portion of the low-code experience.

As the top two arrows show, no-code vendors are expanding the capabilities of their tools to empower business users to create more advanced applications. At the same time, vendors of IDEs (both established and startup) are rethinking their products along low-code lines.

Such tools are still code-centric for professional developers, but bring the ease of use and reduction of time spent on plumbing activities from the low-code world into a best of both worlds combination that pro-coders can appreciate.

It seems that before long, every application construction tool on the market will end up doing everything. The battle will shift to differences in product strengths, rather than distinctions in functionality.

Shifting the Focus Away from Coding

What these tools all have in common, of course, is that word code. The underlying assumption is that building software is really all about writing lines of code, and the best these tools an do is hide that fact.

This assumption, however, is proving false. All three categories of tools are shifting the focus of application away from coding, albeit in different ways.

No-code tools shift the citizen developer’s focus to the user experience (UX) as front-end design sensibilities become a driving force. Similarly, some of these tools empower business users to focus on process design without having to worry about the underlying enabling technology.

Pro-code tools shift the focus of the professional developer away from coding to a greater emphasis on engineering and architecture. In other words, these pros spend more of their time on what it means to build a ‘good’ application, where good means high quality, performant, and generally in alignment with business needs, including the need for greater agility.

Both of these shifts in perspective impact the low-code space. Application creators using these tools are likely to have a greater UX sensibility while simultaneously focusing on what makes a better application overall.

I’m not suggesting, however, that any tool will magically turn someone into a qualified engineer or architect (or interface designer, for that matter). These roles still require expertise, training, and experience.

What the tools bring to the table is an improved level of communication and collaboration, so team members with differing skill sets are better able to build great applications – without worrying about lines of code.

You might think that all this turbulence in these three interrelated markets would be settling down by now. Well, not so fast.

Low-code, in spite of all this activity, is fading away. Instead of a separate market category, low-code is becoming a set of capabilities that products in other categories exhibit.

Robotic Process Automation (RPA), for example, is adding low-code capabilities. Throw in digital process automation, process mining, and rules engines to the mix, and you end up with the Frankenstein’s Monster Gartner calls hyperautomation.

We’re also seeing low-code data analysis tools, low-code business intelligence products, and the like. In fact, any tool that hitherto required hand-coding for something can now benefit from low-code instead.

Why use code to customize such apps when low-code is quicker, delivers a better result, and represents the changes as declarative configurations? Low-code is cracking this enterprise application customization challenge, and not a moment too soon.

Once in a generation a technology comes along that becomes so ubiquitous it fades from view. It happened with TCP/IP and later with Linux. Will low-code follow?

It’s too soon to tell for sure, but indications are strong that it will. And yet, while low-code practices and principles are well on their way to ubiquity, we haven’t reached the theoretical end-game.

If you open your history books, you’ll see that computer scientists have been theorizing about fifth-generation languages (5GLs) for years. With a 5GL, the application creator only has to specify constraints, while the 5GL platform automatically generates the algorithms.

A few specialized 5GLs have come to market but have largely faded into obscurity. The promise of 5GLs has largely been unrealized, and thus the very notion of a 5GL has also faded from view.

Low-code promises to revitalize this concept. Indeed, low-code is certainly well on its way to this vision of 5GL, as we can think of the visual representation of an application as the constraints, while the low-code platform itself fills in the business logic, aka the algorithms.

We’re still not all the way there yet. True, today’s low-code tools can fill in many parts of the business logic for common tasks like submitting a form and updating a database. But there will always be examples of business logic that humans have to craft manually.

Strip away all the marketing hype, and ‘crafting business logic manually’ is nothing more than coding, regardless of the tool. For this reason, we’ll always need coders.

As a result, it’s important to include pro-code in any discussion of low-code. Visual models that represent applications can only take us so far. At some point, coders have got to code.